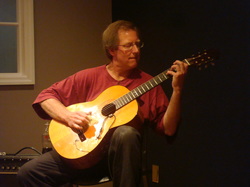 Currently I teach between 15-20 hours of guitar students each week at Madison Academy of Music and Heid Music (2011-present) and Ward-Brodt Music (2006-2011). I teach any style of music, from rock to jazz to classical. Since 1993 when I lived in Minnesota until the present, I have had varying numbers of guitar students whom I taught in my own home or in their home. I teach an advanced level of music theory and introduce composing with guitar technique, so that the student understands their instrument rather than just "memorizing" it. I was employed as a guitar instructor for the Melodee School of Music in Minneapolis, 5/93-5/94. I gave a jazz seminar and performed solo guitar pieces for a chorus class taught by Joseph Brough at Brooklyn Center High School in October, 1991.

40 years of Performing Experience on Guitar

I have played and performed with the University of Wisconsin - Whitewater jazz big band (1980); the jazz-rock fusion group Introspect in Whitewater, WI (1979-1980); solo jazz guitar at the Charleston, Chicago, IL (1987); solo jazz guitar at Town Square Park in St. Paul (1993); and played with the Anoka-Ramsey Community Jazz Ensemble directed by Greg Lewis (1990-1993). I have also played in numerous rock groups, and have free-lanced for bands at weddings and social functions. While living in the Twin Cities (1990-1995), I performed regularly as a soloist at the Bad Habit Cafe, and created Sunfish Quartet (guitar, saxophone/flute, bass, drums) to perform a selection of my jazz originals at local venues.

I currently perform four acts on solo classical guitar, all instrumental, in a fingerpicking style.  One is a 90-minute long tribute to the best of Emerson, Lake and Palmer.  I have a Beatles tribute act of 100 songs, or 4 1/2 hours of music.   I will also play a concert of older and modern jazz standards with improvisation, as well as originals, classical, pop and country.

My wife and I created a folk duo, Nord Musikk, which features her on Norwegian Hardanger Fiddle and myself on guitar. We have performed at coffee houses, weddings and Scandinavian events.

I have written over 100 songs since 1977, starting with rock and folk, and since 1986, jazz. I have both composed and arranged 2 pieces which were performed by the 15-member Anoka-Ramsey Community Jazz Ensemble.

I won a 2009 Madison Area Music Awards (MAMAs), Award for Best Classical Piece of the Year, "Suite for Two Guitars.

Sapphire Mirror, 2018 release is a fingerstyle guitar project with several selections of hammered on electric guitar with the left hand and keyboard with the right hand.  Includes my originals and several covers (Emerson Lake and Palmer, Edgar Winter, Roger Miller and Chick Corea).  For CD track summary and soundclips, please go to the Sapphire Mirror CD page.

Threads, my compilation of solo guitar originals and standards by Miles Davis, Charles Mingus, Hoagy Carmichael and a classical piece by Liszt, has just been released. For CD track summary and soundclips, please go to the Threads CD page.

In 2003, My composition for Norwegian Hardanger Fiddle, entitled The Long Journey, was selected for performance at the AmerikaSlaattar Competition at the Hardanger Fiddle Association of America Festival, Northfield, MN.

In 2000, I recorded a short CD on which I played both guitar and piano. It featured three progressive rock songs, which I composed. I worked with Joe Banks - drums and Bill Solomon - bass.

In 1997, I released a CD to the soundtrack to a musical entitled Spirits of St. Paul for which I have written the book and score. The CD has been reviewed by the Capital Times, Isthmus, Madison Magazine, Showmusic Magazine (Goodspeed Opera House in Connecticut) and Masquerade (England). The musical was performed at Brave Hearts Theatre in May of 1997 to sold-out audiences.